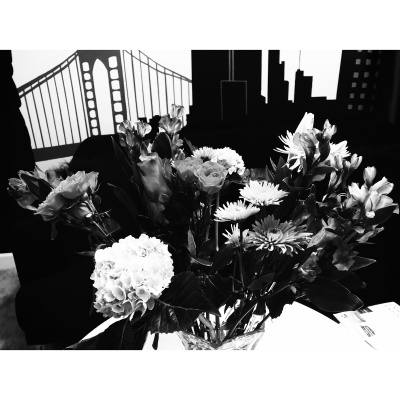 To say I feel less than human, is probably a bit of an understatement. But I do.

I’ve been home for a week. I’ve managed to pretty much lay in bed in agonizing pain the whole time. I had a half-assed attempt to see a friend that resulted in me rushing home as the nausea and aphasia set in.

I successfully made it to massage therapy today. Which meant even after sleeping for roughly 2 hours, I got up at 7:30 and sat in traffic for hours to get to a less than expected appointment.

Mind you, my previous massage therapist was so wonderful I’m most likely spoiled to other techniques. This lady was late, she sat in the same god awful traffic I did. We spent more time going over the woes of her morning, than we did discussing why I was there and what I hoped to achieve through various massage techniques.

The massage room wasn’t dimly lit, and even as the massage started, lights were still on. I found this odd, but decided to just keep my eyes closed. Then she started to strike up a conversation… during my massage…

Yes, she did a wonderful job at relieving the built up neck tension that accumulated from driving across the country quite well, but I didn’t feel “relaxed” after my experience.

I’ll brush it off to her having an off day, as she has really affordable prices and has chronic migraine in her family. And hey, maybe that’s why she didn’t dig into a million questions, because she already “gets it”.

I’ll most likely try out one or two other options before making any real decisions.

But I feel like I’m just in this awkward space.

My medicine was delayed and I won’t have until well into next week. I guess I can say thanks to our lovely Labor Day holiday for making my package sit longer and the dry ice expiring…

It all sounded like such a wonderful idea to move home. To relax. To figure out what’s exacerbating my symptoms, and find a way to manage this pain in a way where I can still be a productive member of society.

But, I’m met with this realization, that it doesn’t matter how much people love me. They won’t get it. Or, maybe it’ll just take extra long to adjust to how horrible this all is and how differently I am forced to live my life because of it.

When I drag myself out of bed after not sleeping all night, to go make my coffee. The adjustment period from getting out of bed, to having some coffee, to making breakfast and maybe starting my day isn’t quick. It isn’t pleasant. It’s typically a 3 hour long endeavor. I’m so used to being able to get up, start my diffuser, enjoy my first cup of coffee on the couch as I slowly pull myself out of the fog, while still hiding from the day in my pitch black living room.

But someone new lives in that living room now. And, new carpeting means no open drinks up in my new “apartment”, yet downstairs is loud. Downstairs is bright. Its like I wake up and instantly am thrown into the sun.

I can’t just look at my parents and tell them to cover their windows. It is their house. It doesn’t matter how many times I half iterate that I’m in pain, because half of second of energy or any sort of positive response triggers a “she must be feeling better so now we can converse” response. But, when I glare at the thought of a conversation, I feel like I’m just shoved back into a hole of being a disrespectful brat and that my pain really doesn’t get to determine if I’m spoken to or not.

I’ve gone an entire year having 3 or more hours of total silence and total darkness to get ready in. Now that is gone.

There isn’t anything I dread more than being asked what I plan on doing for the day.

I’m not going out. I don’t care what’s for dinner. I hope it’s toast. Toast I can stomach.

But the constant guilt, hurts.

Dinner is made for all of us. Conversation is had at dinner, when I can barely open my jaw to eat. But I can’t be rude.

My face hurts, but apparently I’m angry at something.

I guess the phrase “your face will get stuck like that” is true, because my face is constantly pinched with the pulsing pain and failed attempts at squinting my eyes to try and reduce how much unwanted light I’m being exposed to.

But, the pain in my face is seen as anger. And isn’t able to be seen as anything else. How can I tell? Because I can see it in your face. And that hurts.

Being told to deal with it when it comes to the temperature the AC is on hurts. With as much pain as I’m in, the last thing my body is able to do is regulate temperature. So, even if I’ve found a scrap of energy to unpack, it isn’t long before I’m just laying on the bathroom floor trying desperately to cool down.

It hurts because these are people who care. They don’t think I’m a burden and I know that. But it certainly feels like I’m trapped, unable to even adjust the temperature to remove the thick humid air from my bedroom. Unable to go get water because its too bright. Unable to do anything without being treated as lazy.

I mean you aren’t wrong. I guess it is pretty lazy that it’s taken a week to half unpack. I can barely wash my face or stand the pain of taking a shower, but fatigue couldn’t possible be a component here.

But, oh I just need to say something.

Sure, I’d really love for my medicine to come when its supposed to. I’d love even more to not have to pee every 10 minutes because that’s how my pain feels like attacking the rest of my body this week. I’d love to be able to walk in a straight line at night without being hindered by vertigo that makes me fall flat on my face. I’d love to not have this condition at all. But that’s not an option.

I don’t feel welcome. I don’t feel understood. And I don’t know how to explain it any better than I hurt and the hurt won’t be stopping anytime in the foreseeable future.

One thought on “It Hurts”