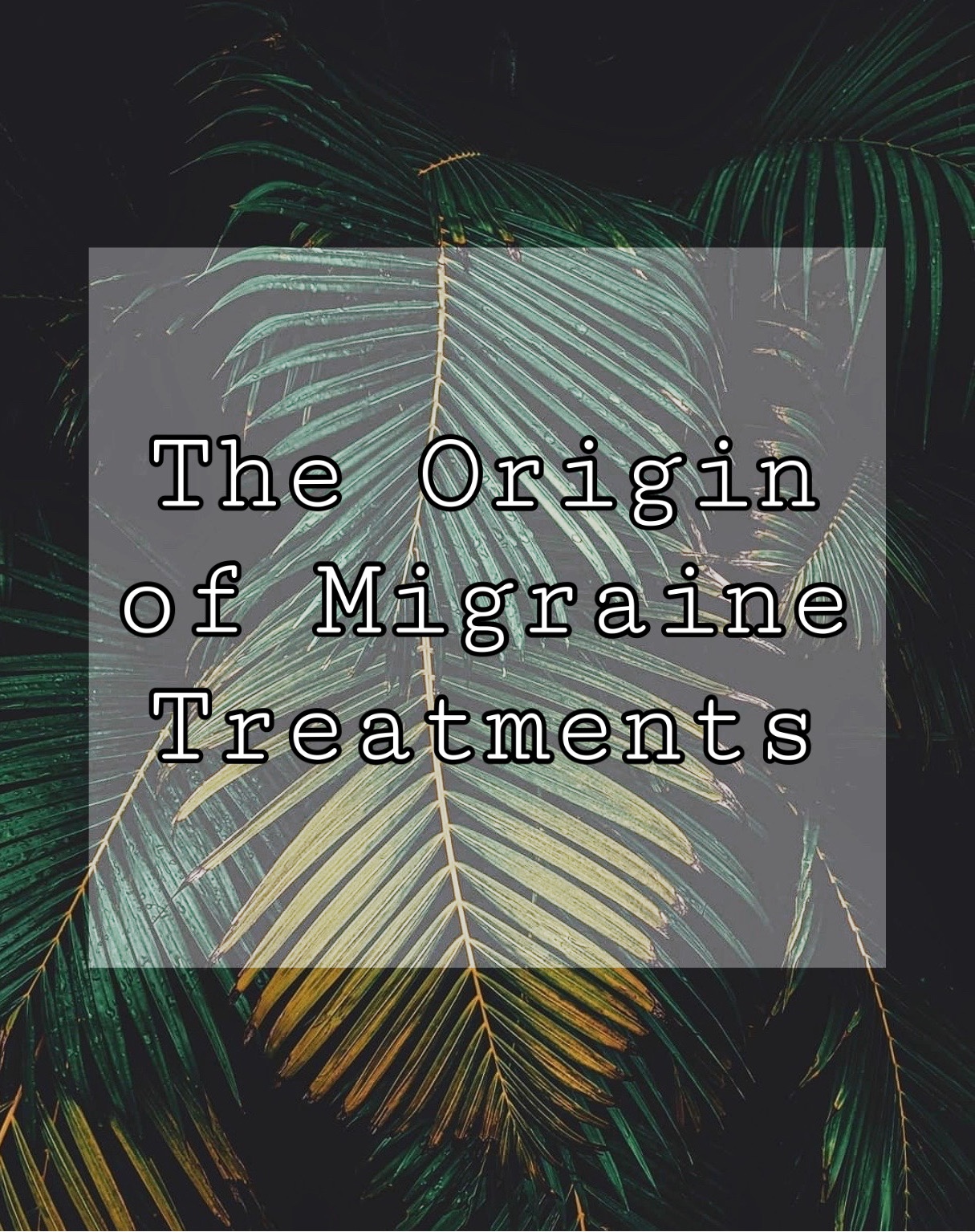 From an outside perspective, migraine disease seems pretty simple and straight forward. Once the barrier has been crossed leaving the implications of it “just being a headache” behind, the complex nature of debilitating head pain mixed with a variety of other symptoms steps into the light.

However, most people see the solution to migraine within medicine.

To me, this is where the difference between people with migraine and people without is the largest. On the end where we suffer, lose our jobs, our relationships, our independence, we know that the medicine options can be impractical.

Since we’re mentioning origins, it’s important to include the trivial 11th century migraine treatment that involved slicing the patients temples open, inserting a clove of garlic, after a day or so – once the wound started to ooze – the doctor would remove the garlic and cauterize the incision. Sounds crazy but modern medicine isn’t as far removed as we’d like to believe it is.

So what are these migraine medicines really?

Anti-Hypertensive for the treatment of migraine

Designed to treat high-blood pressure, many of these drugs (Metoprolol and Propranolol) are used in the preventative treatment of migraine.

In modern medicine, scientists and researches believe that the blood vessels in the head and neck play a role in headaches and migraine. Constricting the blood vessels, dilating them so blood can flow easier, and relaxing them have all been explored as ways to reduce head pain.

If you’ve had a migraine, you may be familiar with the pulsing pain that almost mirrors your heart beat. You may have visibly bulged veins in your forehead. You may be able to feel the veins above your ear more distinctly.

Anti-Convulsants for the treatment of migraine

As the name would suggest, this class of medications was designed for and used in the treatment of seizures and epilepsy. Common medications include the popular Topamax, Keppra, and Depakote.

Epilepsy is a neurological disorder, the use of the same medications came from observation of fewer migraine days in epilepsy patients leading to further testing to show effectiveness for treatment of migraine.

Anti-Depressants for treatment of migraine

Anti-depressants are often used as an initial treatment or in combination to treat migraine. Medications like amitriptyline are commonly used.

These medications have pain relieving properties while also have side effects that improve sleep. One major area of focus in the treatment of migraine is sleep hygiene, so medications that aid in quality of sleep may naturally aid in migraine.

It is also highly important to note that roughly 25% of migraine patients also suffer from depression, and the risk increases for chronic and intractable patients.

CGRP for treatment of migraine

This new class of medicine, only introduced into the market in 2018, is the first of its kind developed 100% for the treatment of migraine. It explores specifically the calcitonin gene-related peptide, a protein that has been identified as a possible contributor to migraine pain, specifically caused by inflammation.

The medication targets the receptors of the molecules and works to block them from either sending or receiving the proteins, in turn disrupting the nervous system and preventing pain signals from being sent, stopping or vastly reducing the presence of migraine.

Botox for treatment of migraine

An accidental discovery is the best way to describe how a cosmetic procedure became one of the most widely known and suggested treatment for migraine. Botox freezes the muscles in your face, neck and sometimes upper shoulders, preventing the muscles from contracting for approximately three months.

Results for Propranolol and Amitryptyline are similiar to Topamax. CGRP antibodies have reported success rated closer to 75%, while Botox has a success rate of 65%.

With the large variety of medications used just in the prevention of migraine, there’s one common theme throughout:

Migraine overlaps with a myriad of conditions and multiple neurological pathways can be used to explain the symptoms but there is no one specific channel that causes migraine.

What do these treatments tell us?

There are millions of people who have found successful treatment options with medications already available, millions more found their relief when the CGRP medications came to the market, but there are still 4 million people in the US alone who have chronic and intractable migraines that are not being managed by existing options.

**It is important to note that in my opinion, being in a chronic migraine category means that the migraines are not being managed, even if we are dealing with them or successfully working with them, I would gauge effective treatment by moving away from chronicification and back to episodic status. Drugs are analyzed by how well they reduce the frequency, duration, and severity of an attack, so an effective treatment would address all three areas.

I don’t know many people who haven’t tried all preventative options available to them making it clear that migraine research and medicine still has a long ways to go to discover additional areas that can be targeted to reduce migraine. And this doesn’t even touch on other symptoms that are not controlled or inability to access or pay for treatments.

People outside of the realm of patients and researchers are simply unaware that most options for treating migraine weren’t designed for migraine, so there’s a bit of a shock factor when medication doesn’t work.

The most accurate explanation I’ve heard to best describe migraine is that: a migraine and the associated head pain is our body’s way of telling us that something isn’t working properly.

It’s really broad, but it points to all the different possibilities that may be contributing to migraine and provides a relatively straight forward explanation as to why existing treatments, lifestyle changes, and therapies don’t always work.

To the rest of the world, when you’re sick and something is wrong you go to the doctor and they fix it. But for us with migraine and many other conditions that get categorized as “chronic” and lacking a cure, the doctor is only the first step in what will be a life-long battle for better medicine, better research, more awareness, and acceptance in society.

Disclosure: Although this article is based on facts, nothing here is intended to be used in diagnosis, treatment, or evaluation of treatments, and conclusions drawn are of my own opinion and experiences. The intention of this article is to bring awareness to the complexity of migraine and the origins of current treatments and the dire need for more options.

If you’re interested in further supporting my content, keeping this blog ad free, and gaining access to exclusive weekly content, consider becoming my Patron on Patreon! All proceeds go towards medical expenses and research – including the upcoming Migraine World Summit this March. Learn more and sign up here!