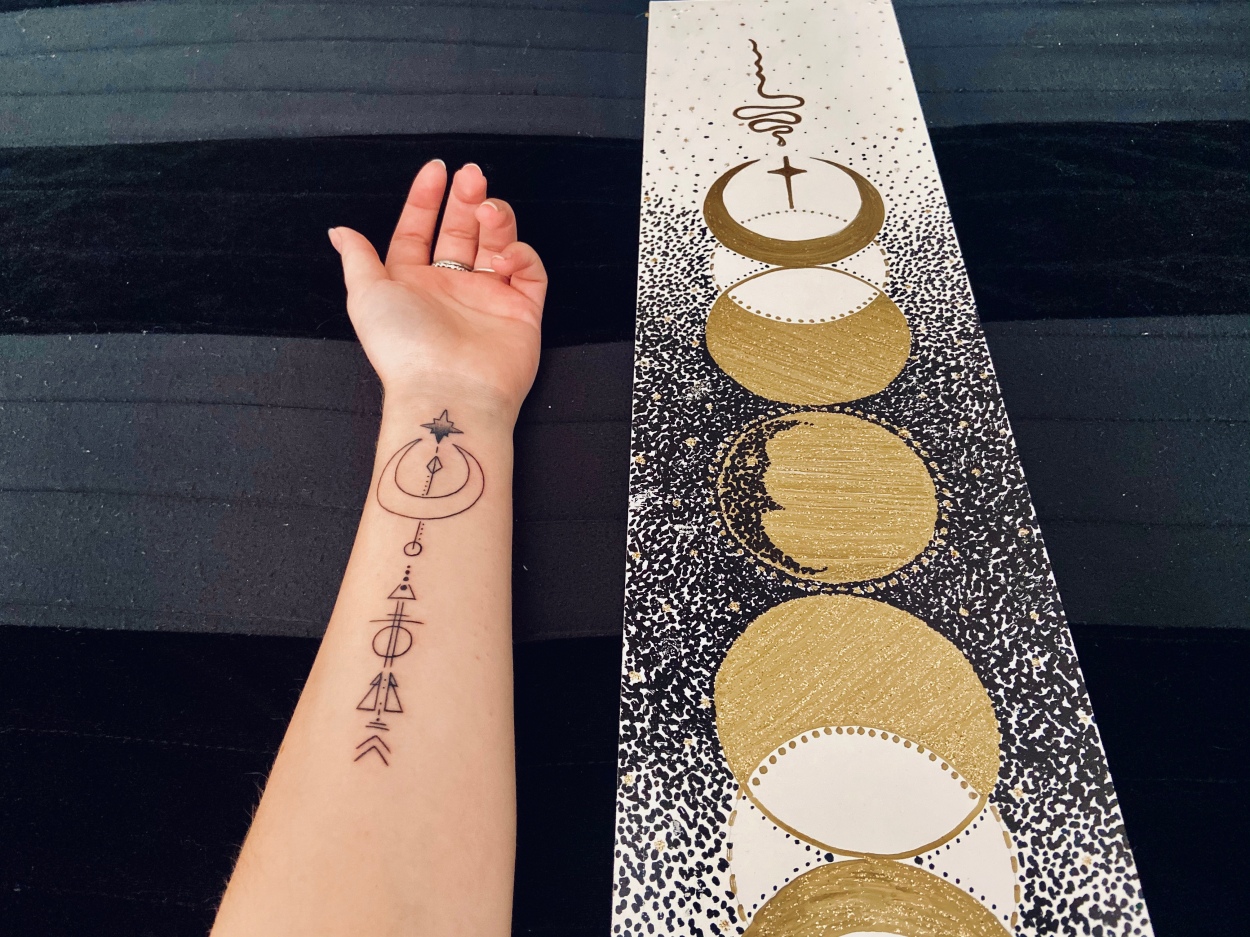 A year ago, I laid out in the freezing cold in the middle of the night on my driveway. Giant comforter and a pile of pillows strewn across in an attempt to mask the freezing concrete below.

My mom tip-toed outside, and for over an hour we laid under the moon admiring it’s beauty.

We talked about different constellations. Orion’s belt seems to be both of our favorites.

For her, it was the first time she’d just laid under the stars since she was a kid.

Perhaps this all was the same day I got word my disability had been approved. Perhaps it was the next, but one thing is for certain – since that day the moon has been my guide.

Amidst the chaos of the next month, the brief period of lower pain, the almost constant feeling of guilt and unworthyness and confusion that came with being on SSDI… all that I really remember is the moon.

And what a special moon that was. In January, we got to lay out in the cold again, this time witnessing a magical lunar eclipse.

It would be three entire months before I saw the moon again – and those months were really hard on me.

But, in April the moon showed her beautiful face once again even though it was mostly a cloud covered night.

Around this time, I started to really learn about the moon and the meanings behind the names. April was a Full Pink Moon, symbolic of reawakening, rebirth, and renewal. I didn’t recognize it at the time, but April was when I ventured on my journey with the lifestyle program in hopes of reclaiming my life from Migraine and although it didn’t turn out as I hoped, there was a reawakening within of a search for love and beauty and a renewed appreciation for life around me.

By May, I had fully embraced a new appreciation for creativity and found myself surrounded by an incredible art world. This Full Moon was extra special because it is known as the Corn Moon and anyone who knows me knows how much I love corn. It is more commonly known as a flower moon.

I began to play around with photography more, sure the moon is beautiful on its own, but it looks extra special when it’s hiding behind various plants.

As June rolled around, I invested in a new camera to really enjoy the moon… only to discover that the new camera would need an even fancier lens and was relatively useless.

It was becoming a norm in my house for my mom to shout up at me to announce that the moon was out.

The Strawberry Full Moon is a time to reflect on the work you’ve done and take time to enjoy the success of your labors. June was perhaps my most “fruitful” month, being my lowest in pain and a time where I pushed myself to extend my boundaries and reclaim parts of my freedom by moving back out on my own.

As with the beginning of the year, I went another three months without seeing the full moon. The transition of my move took an incredible toll and I found that my lifestyle program wasn’t bringing the success I had desperately longed for.

During this time, I channeled the moon and created my very own collection of glittery moon paintings.

And, as September neared I realized I wouldn’t get to enjoy the beautiful full moon with my mom as I had for months prior. I vividly remember dragging myself out onto the tennis courts with my camera to capture the moon, checking in with my mom to see when the moon had risen because I was in a lot more pain than I would have liked.

It took almost an hour for the thick haze on that Friday the 13th to clear making photography a bit of a challenge.

In September, I began to embrace the healing energies of the world around us, meaning I spent a good bit of time appreciating my crystals and that with a Full Moon I could use that energy to manifest what I needed in my life. Ironically I asked for money to flow to me and for the entire next two months all expenses I had seemed to come back via reimbursements, insurance claims, free food offers, or credit card rewards.

October is always a special month for me, and this last October was incredibly chaotic and resulted in me getting a new apartment. I’m really thankful I got to see the full moon to break up some of the madness of the month.

It seemed that this was the first month I really noticed the moon seeming to guide me and offer a certain peace I couldn’t find anywhere else.

As November rolled around, I finally was able to see how important the moon was on my own journey.

Back in April, my coach for the lifestyle program had told me that one of the most important aspects of taking my life back would be to find the spirituality that was missing from my life – for him he was a religious man – for me, that guidance and sense of unknown needing to be embraced came from the little light shining down – the moon.

And so, I began taking a special interest and also captured my best photo of the moon yet:

The November full moon felt really special to me. In a time where I was recongnizing that my pain was getting worse and that the weather was causing a lot of problems, I needed to be able to see the moon to feel like it was all going to be okay.

And we had a really large storm roll through that almost made me miss it.

But, I captured the moon between the clouds and the trees and have some of my favorite images from that night.

Which brings us to today.

It moves in perfect 28 day cycles, at its fullest point we can ask the moon for abundance and manifest what we want our life to look like. At its darkest, we release what is holding us back. For most people, goals are only set with a new year, and we often fail miserably. But for me, embracing this 28 day cycle of working towards goals and then releasing and letting go of what doesn’t serve me opens up a new perspective for growth.

And that is what this tattoo represents.

The crescent moon matches art I am most proud of that has touched thousands of souls. It represents a guide I have found to keep me grounded. A universal truth of sorts.

The arrow shooting through the moon is a symbol for whats next. I don’t have to know what it is, that’s how the uncertainty of the universe works, and I am ready to embrace this next decade fully.

So to the moon, thank you.