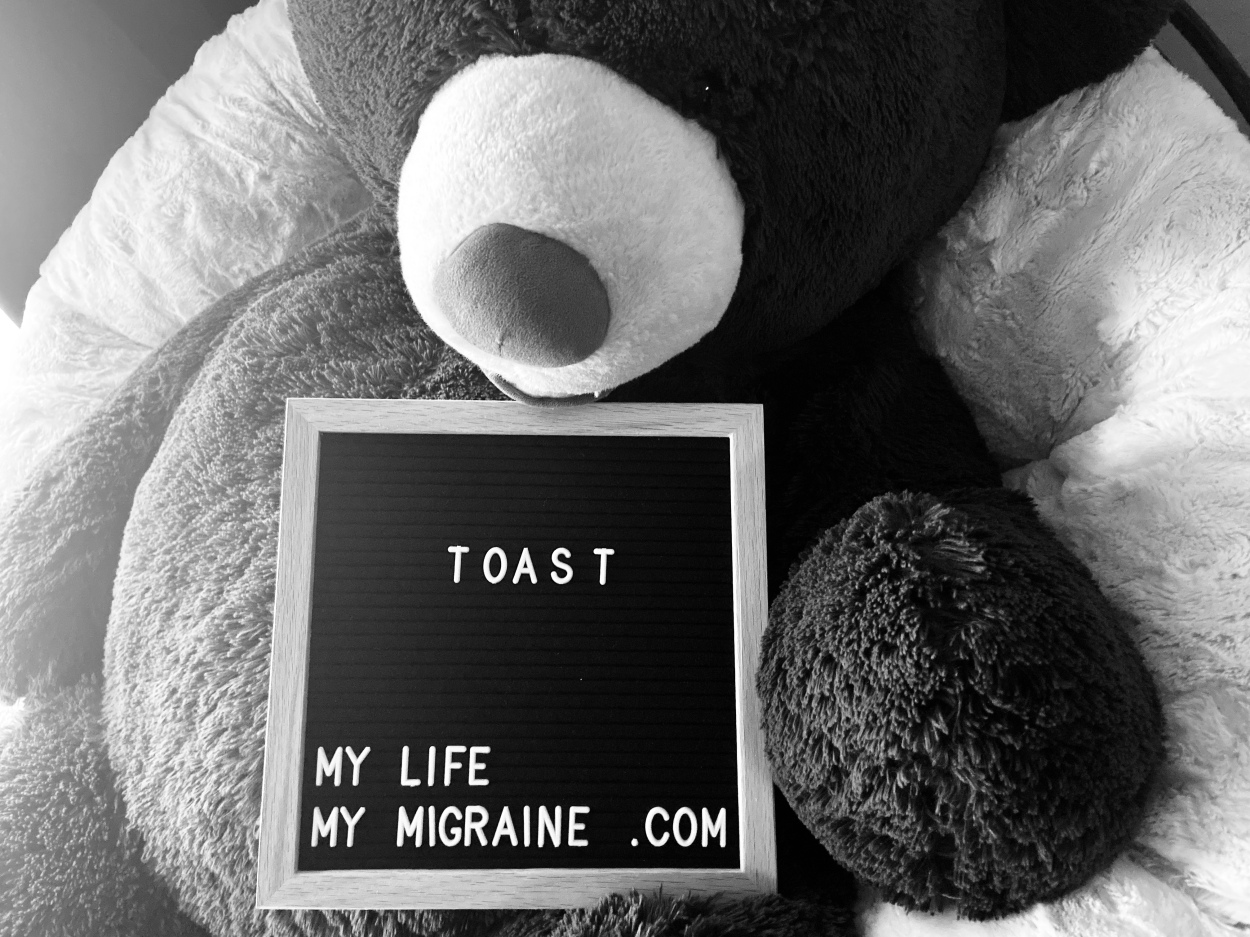 Toast perhaps serves as one of the few minor details of my life that is largely unimportant to most people, but has a huge significance to those closest to me.

See, I have a very interesting relationship with toast.

And lately, I’ve found that it has become the crux of a joke that many people have taken much more seriously than necessary.

So I’ll begin by saying I absolutely love toast.

Ever since I was a kid and I’d enjoy the occasional breakfast treat of toast smothered in butter and doused in cinnamon sugar, it has always felt like more a treat than a regular portion of my diet.

Until of course, toast became my diet.

During the worst period of migraine flares, toast has literally been my saving grace.

On nights when I’d crawled in bed after school, slept through dinner, and aimlessly wandered downstairs just before midnight, toast (and my mom) were there. I’d quietly knock on her door hoping she was awake and could help me. Because despite needing to eat and being hungry, I was often too out of it to cook.

So many nights were littered with me sitting on a bar stool, mom standing over a toaster and followed by me spending half an hour attempting to actually eat the toast.

I can remember outings with friends that would leave everyone else having a great time and me hunched over a pile of toast at iHop hoping that maybe, just maybe it would carry me over until the night was over.

Hundreds of mornings I’d wake up, much too sick to participate in life, and after sending off whatever: “Sorry I won’t be in class today” or “Will be heading to work a bit late as my medicine kicks in” message, I’d make my way to the kitchen, pour myself another cup of coffee and prepare a single piece of toast.

Best case scenario? I’d find myself shortly making another piece of toast and my appetite would return, my head pain would begin to dissipate, and my medication would start to kick in.

Worst case scenario? This would last all day long and I would end my day by consuming a third piece of toast.

Now, toast is more of a place holder. If I find I’m too sick to finish my granola, I’ll make a slice of toast to eat. If my jaw is absolutely killing me because the pressure and tension is too much, two slices of toast can make a really fantastic lunch before trying to nap.

And so, I tend to joke about toast.

If I’m angry and struggling to plan out meals… If I can’t make it to the grocery store and the delivery window for the day has closed… If I’m sick of whatever I’ve been eating… it becomes an automatic “Well fine I guess I’ll just eat toast!”

This last month when I realized I absolutely needed to get myself to a dentist, and then got a quote for said dentist… and then continued to glance over my budget where unexpected moving costs ate up a bit of money… and continued to look at my budget wondering how on earth I spent $100 extra on food for the last month compared to normal… and realized that it’s the time of year where we ought to start finding Christmas presents… the only solution to everything I could come up with was toast.

Which led to this:

I will openly admit I have such a problem with people who spend all day begging for money on the internet when the only two instances I ever asked for help/money were met with harsh criticism from family, therefore I am 100% only open to people who want to be my patrons and only advertise that or purchasing art made by me as a way to financially assist me. (and yes at one point I had a medically go-fund me to support acupuncture treatments, it was up for 4 hours before I was told I had no business living on my own if I couldn’t afford a medical treatment. Still haven’t been able to afford acupuncture. And that one time I asked for gift cards instead of a tangible gift because I wanted to go to a museum that had big dinosaurs in it.)

But, alas toast is my funny go to.

And I wasn’t kidding at all – I have bags full of bread ends in my freezer to be used as french toast. Bread is actually REALLY affordable. And there are SO many ways to eat toast.

So as part of my “hey lets save money this month, especially in the food area of things because what the hell was last month” I’m relying on a LOT of toast.

I have to laugh, I responded to a comment on The Mighty asking about a goal we were working towards and expressed how I was trying to save money on food and was going to be eating a bunch of toast – I shared the yummy recipe I made with the tomatoes – and got a nice little lecture about how I needed to remember to have nutritious food. I laugh because I made a really nutritious meal and was proud of it, but the idea that a sick person might need to adjust their spending habits with food just wasn’t feasible to this person.

Jokes aside, I thought I’d finish this up with my favorite ways to enjoy toast:

This is what I meant by “I’m eating toast all month” and no one caught on.

I’m talking about the most delicious thing I have ever made that has made me look at french toast in an entirely new light. All because I had half a cup of cherry tomatoes leftover in my fridge…

Thank you mom for sending me this Rachel Ray recipe.

Imagine this… you add in some Parmesan and thyme to your batter. Meanwhile, you’re softening some tomatoes in garlic and basil and mix in some balsamic glaze. *chef’s kiss*

What I smear on the rest of my toast?

For my other less exciting toast options I tend to switch up between plain old butter – for when I really am not even hungry but just need food in my stomach, to peanut butter – for when I feel awful and won’t feel good for awhile and need protein and real substance to tide me over, to strawberry jam – for when I don’t feel great but definitely want a little flavor.

And if I’m really feeling fantastic but want to just shove cooking out of the way, I make the old reliable cinnamon sugar toast.

As the holidays approach, and I continue to make strides towards finding new treatments it would mean the world to me if you’d consider joining me on Patreon and signing up for a monthly subscription to exclusive content including vlogs and bonus updates. My Patreon helps fund new medical treatments each month. You can learn more and sign up here!